From a small Washington town to one of the world’s largest cities, Caleb Huffman is on a quest to connect with others — and expand his own perspective in the process. 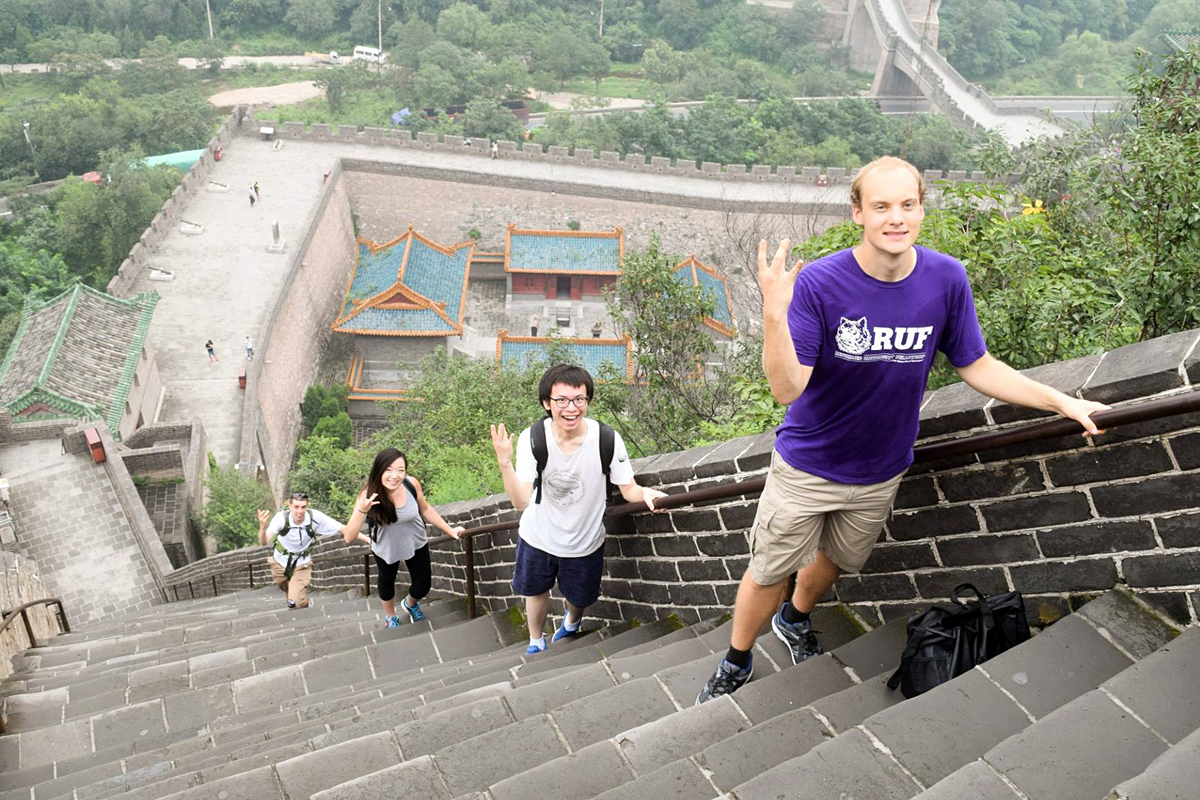 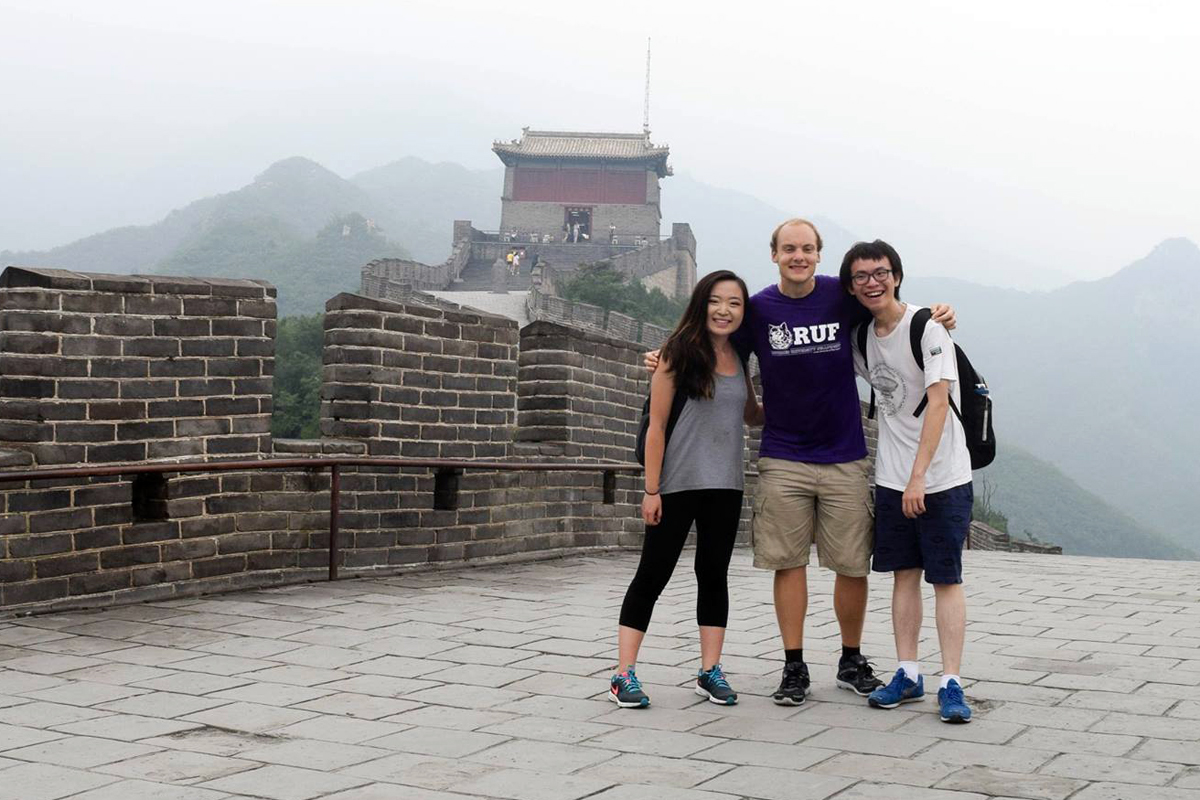 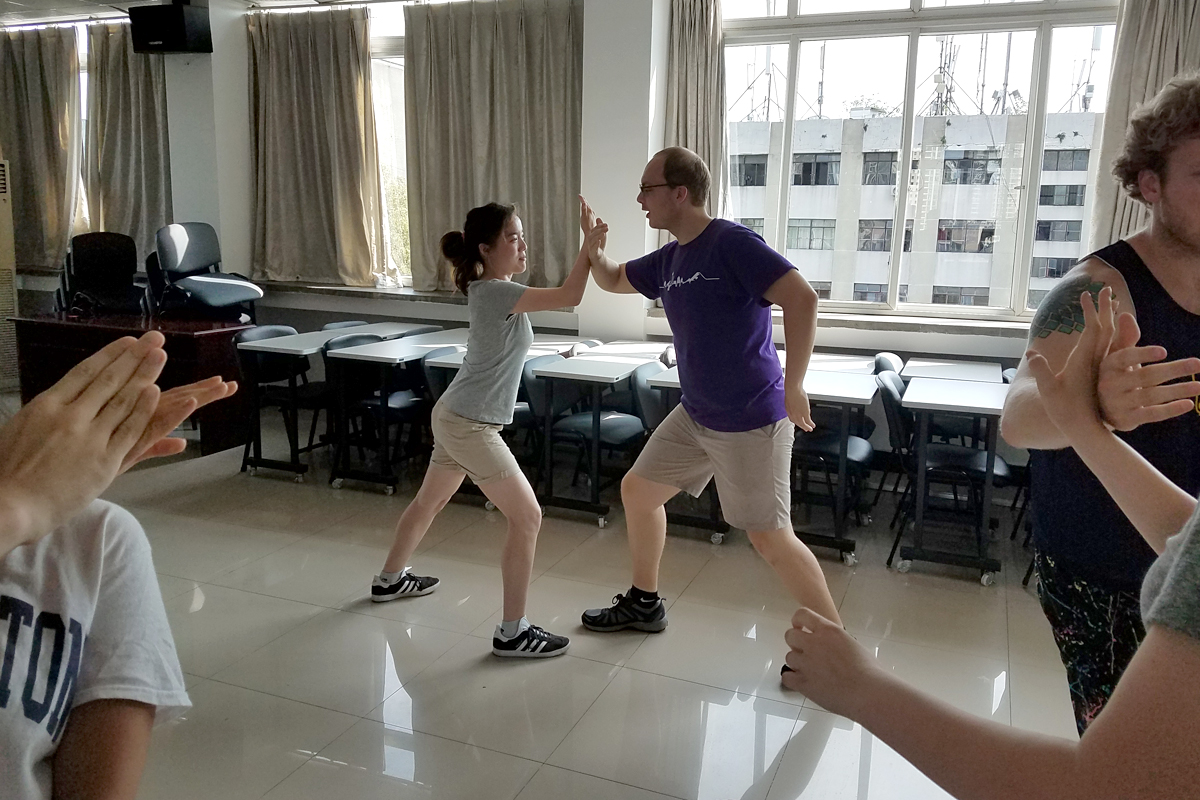 Caleb Huffman, ’18, admits that his transition to the University of Washington was daunting. The number of undergraduates alone is 30 times larger than the population of his rural Washington hometown, Onalaska.

But four years later, the UW senior is again on the cusp of uprooting himself to a much larger city. This fall, he’ll move to Beijing to spend two years studying Chinese law and society at Peking University.

Why does Huffman embrace such drastic changes of scenery? It’s part of his quest to connect with others despite — and because of — their many differences.

In third grade, Huffman moved from Renton, an economically and racially diverse city south of Seattle, to Onalaska. “It was the complete opposite,” he says. “But I consider myself someone who’s been able to bridge the urban-rural divide, and it’s something I’ve remained very interested in.”

When he was accepted to the UW, Huffman knew he wanted to major in both political science and communication. But first he had to find a way to pay for it.

Federal loans, financial aid and the State Need Grant went a long way, but they still left a significant gap. Then the philanthropically supported Husky Promise, which covers tuition and fees for Washington state students from low-income families, brought him over the finish line. “The support I received made all the difference,” he says.

When he’s not planning his next trip to China, Caleb Huffman is extremely active on the UW campus. What else is he up to?

He lives in the International Friendship House, owned by University Presbyterian Church. “The IFH houses students from all over the world. We host a dinner every Tuesday for international students and go on service learning trips together.”

He played trombone in the UW Philharmonic Orchestra for three years. “In high school, I was in marching band and concert band, so I wanted something different when I got to the UW: orchestra with all the strings. It was fun!”

He’s in departmental honors for both his majors and for interdisciplinary honors, and he completed three theses in one year. “It was crazy,” he says. “But I worked hard at it and did fine.”

Without a financial burden to worry about, Huffman hit the ground running at the UW, participating in several campus groups and exploring his interest in building bridges between communities.

The UW chapter of the Veritas Forum, where Huffman would eventually serve as student director, had a strong impact on him. The faith-based organization’s tagline is “Pursuing Truth Together,” and as a Christian, Huffman enjoyed engaging with people from different belief systems to discuss some of life’s most difficult questions.

“We’re not omniscient as humans,” he says. “The information we’ve processed only gives us a certain slice of the world, which is inherently going to be limited.”

After his first year at the UW, Huffman pushed himself even further by traveling outside the U.S. for the first time. He went to Rome with the support of a grant from the U.S. Department of State, which he learned about through the UW Office of Merit Scholarships, Fellowships and Awards (OMSFA). In addition to studying global cities and human migrations, he volunteered at a refugee center.

“I met a lot of political refugees, and their stories were just heartbreaking,” he says. “I got really interested in international relations after that.” 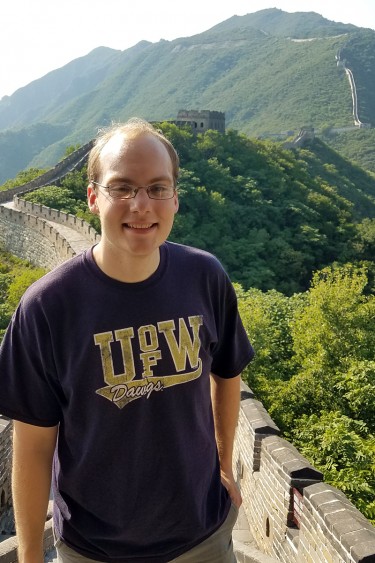 In his sophomore year, Huffman was accepted into the Husky Presidential Ambassadors Leadership Institute, which matches current UW students with incoming first-year students from China to develop cross-cultural communication and leadership skills. After a week of leadership prep on campus, Huffman spent two weeks with his cohort at Tsinghua University in Beijing, where they studied alongside newly admitted UW international students who would be moving to Seattle in the fall.

“It’s really easy for international students to remain in their communities at the UW,” says Huffman. “Some study abroad in the United States, but they never truly ‘leave’ their country. This program is trying to bridge that divide.”

Huffman’s growing interest in U.S.–China relations made him want to return and keep learning. With more help from OMSFA, he was selected to participate in two international bridge-building programs with conferences in the U.S. and China. He spent part of last summer in Chengdu, improving his Mandarin and learning more about China’s culture. And he’s involved in the Gorton Center Global Leaders Program through the National Bureau of Asian Research, focusing on policy and business leadership.

“Humans are similar in a lot of ways, but our differences are there — and sometimes you can’t see them,” Huffman says. “That matters because when you’re making policy, if you don’t know about those differences, you might hurt people.”

The next stage of the journey

Ultimately, Huffman hopes to become a lawyer, working in the U.S. legal system to help strengthen our country’s relationship with China and contribute to a more peaceful world. But first he’s heading back to China for graduate school to deepen his understanding of its legal system.

“The U.S.–China relationship will be the most critical bilateral relationship of my lifetime. How we will shape each other’s, and the world’s, international norms is a question of utmost importance,” says Huffman.

As he prepares to move to a place that differs dramatically from Seattle in size and culture, Huffman recalls a time when he was nervous about coming to the UW. “Now that seems kind of silly to me, because you can find your community anywhere. There are seven billion people in the world. What community are you going to find? Where are you going to go?”