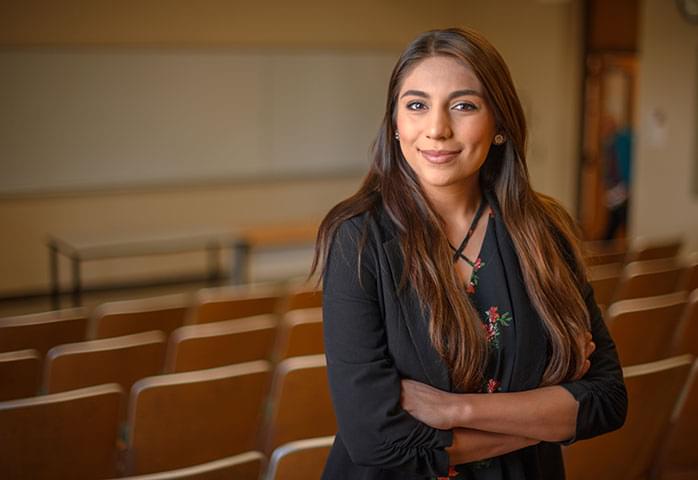 It’s fall 2014. New freshman Lysandra Perez, the first in her family to attend college, sits on the bed in her Streit-Perham Hall dorm room. The emotional farewells are done, and her parents are driving back home to the small town of Moxee, near Yakima. Her roommates won’t be arriving for another few days.

She is all alone. “What do I do now?” she remembers thinking in a moment of panic.

Fortunately, the panic didn’t last long. “I had to remind myself that going to college and being away from home were a chance to do things on my own,” Perez says.

So that’s what she did. She walked around campus with a copy of her course schedule, soaking in the sunshine and making sure she knew exactly where to go when the first day of classes arrived. It would be a big moment for her whole family, and she wanted to be ready.

As a first-generation college student, Perez knew that her success would be vitally important to her family. Her father had intended to continue in college after earning his GED through the High School Equivalency Program at WSU, but financial concerns upended his plans. She vividly remembers a teary-eyed moment when he brought her to campus. “You’re living my dream,” he said. “Make us proud.”

Perez’s father is a Mexican immigrant. Her mother is the child of immigrants, and her large extended family is split between the United States and Mexico.

Mexico has a more collectivist culture than the U.S., Perez explains. There’s much more emphasis on doing what’s good for the group. In her family, that means each member is expected to help provide for the rest. So after high school, newly minted adults traditionally go straight into the workplace. Leaving the home is almost unthinkable — tantamount to ditching the family.

Growing up, Perez recognized the dissonance between her family culture and the greater community’s focus on individual achievement.

“I had a lot of experiences where my values didn’t match the culture around me. I never knew what to name it,” she says.

But her parents broke with tradition in one way, at least: They insisted that she and her younger brother go to college.

“When I took sociology and psychology classes, there were concepts and theories that started putting names to what I was experiencing.” Perez realized that she had essentially been living in two different cultures at the same time. “I thought that was fascinating and wanted to look into it more.”

As luck would have it, during Perez’s first semester at WSU, a McNair Scholars Program representative visited one of her classes to give a presentation on how students could get involved in faculty-mentored research. Perez jumped at the chance.

Raymond Herrera, the University’s McNair program director, helped Perez get in touch with WSU sociology professor Monica Johnson, who became her mentor. Together, they developed a research plan.

Through reading and background research, Perez discovered an index developed by social scientists that pinpoints where national cultures lie on a collectivist-to-individualist spectrum. Most of the world is on the collectivist end of the scale — including, she points out, her family’s native Mexico. The United States is the world’s most individualistic culture, with other Anglophone countries like the United Kingdom and Australia rounding out the set.

The index gave her a way to pursue her research goal: to identify cultural elements that affect how first-generation Latinx students adjust to living and learning in the U.S. college system.

Perez interviewed 20 WSU students of Latinx heritage. She asked questions designed to elicit data on their family environments and the educational environment at WSU. She spent several months organizing and analyzing the data.

The findings cast new light on her own experience as a first-generation student. They indicated that the collectivist-to-individualist cultural transition is a significant nonacademic barrier to college success.

When the project was finished, Perez entered the University’s Showcase for Undergraduate Research, an annual poster session and competition for students from all majors. Her presentation won a Crimson Award, recognizing her among the University’s top undergraduate researchers.

“I don’t know where I would be if I hadn’t found out that I could do research with a faculty mentor,” says Perez. “Without that and the McNair Program, my academic trajectory would look totally different right now. That was my foundation.”

Perez and Johnson are writing a paper about the study to submit to an interdisciplinary research journal, so Perez may have the uncommon honor of becoming a published scholar as an undergraduate.

She envisions applying her research findings in programs that help students from collectivist cultures succeed in the individualistic cultures of American colleges and workplaces. Not only does she want to help students form more effective learning strategies, but she also wants to help colleges employ more effective teaching methods and forge better relationships with multicultural students.

Now, in fall 2018, Perez is a fifth-year senior — taking a couple of extra semesters to finish up a major in sociology to add to her first major in psychology. She loves how the two disciplines dovetail, helping her dig into the hows and whys of social organization and human behavior from individual and sociocultural perspectives.

She is preparing applications for graduate programs. Her professor in a recent summer research experience at Purdue University has invited her to join a research team there.

She’s also the proud mentor of a new Coug: Her younger brother is a freshman this year, living in historic Duncan-Dunn Hall.

As Perez blazes a new trail, she continues to uphold the tradition she embraced as a child: looking out for her family. When her brother arrived on campus, she helped him settle in — making certain that he didn’t endure a panicked “What do I do now?” moment of his own.