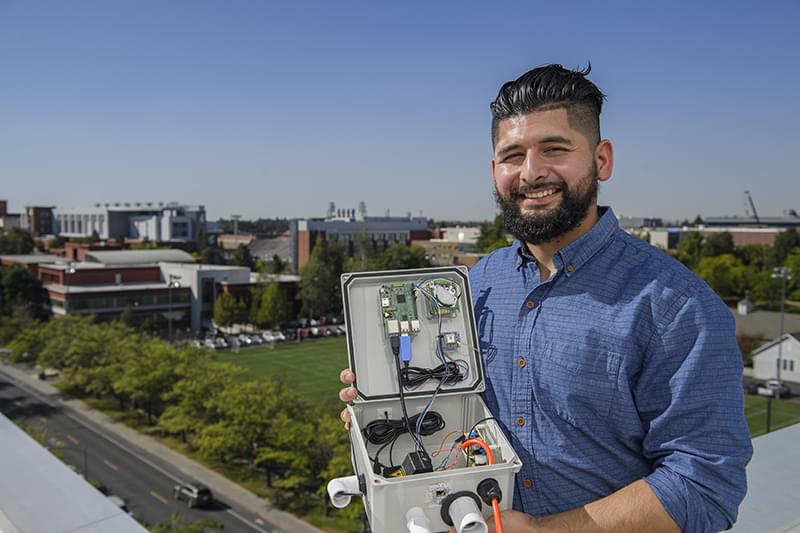 At Washington State University, McNair undergraduate scholars have the chance to conduct faculty-mentored research projects and other challenging opportunities.

For Yoni Rodriguez, a senior in biochemistry, the McNair program plays a key role in furthering his dream to protect vulnerable communities from the effects of environmental toxins.

The son of Mexican immigrants, Rodriguez was born in Toppenish and began helping out in the fields alongside his parents at age five. He is the first in his family to attend college.

One summer, while working in the orchards to pay tuition, Rodriguez and his older Mexican coworker were accidentally sprayed with pesticide. Though the farm manager recommended immediate medical treatment, he declined to drive them to the hospital. In the end, Rodriguez drove and two days later, his coworker who had fallen ill was fired.

“I realized then that migrants in America encounter more than just xenophobic injustices,” says Rodriguez. “They also run the risks of developing neurological diseases and cancers from their long-term exposure to pesticides.”

He went on to complete coursework at Yakima Valley College, which included a research project investigating fetal anencephaly associated with contaminated drinking water on the Yakama Indian Reservation.

“I also tested my grandmother’s home and was upset to discover the lead levels were above the legal EPA limit—to the point the state should have intervened,” says Rodriguez. “I started thinking, ‘What else don’t we know?’”

Once accepted into WSU, he enrolled in the National Science Foundation’s Research Experience for Undergraduates program with Von Walden, professor of civil and environmental engineering and a member of the Laboratory for Atmospheric Research.

In the lab, Rodriguez studied the health effects of wildfire smoke and helped develop air quality sensors for monitoring pollution.

He was chosen to be a McNair scholar in spring 2019 and asked Walden to be his mentor.

“My question was, ‘What are we doing to filter the air for people in low-income areas who can’t afford an expensive filter system?’” says Rodriguez. “A whole-house filtration system can run $12,000 or more. Even a good one-room filter can cost up to $700.”

He decided his McNair project would test the efficiency of a simple box fan filtration system for removing dangerous pollutants during wildfire season.

“It has been such a pleasure working with Yoni,” says Walden. “He is a very talented and hard-working student. I’m certain that Dr. McNair would be proud of him.”

But Walden admits he didn’t initially know who McNair was. The revelation only came later when he saw a presentation detailing McNair’s history.

“I realized it was around the same time I sent an experiment into space as an undergraduate researcher at Utah State University,” Walden says. “I thought, ‘Oh, my gosh, I think he was on my shuttle!’”

Indeed, Walden had designed a physics experiment that flew on the Challenger on February 3, 1984, at the same time mission specialist McNair was aboard.

“He may have even flipped the switch on my experiment,” says Walden. “It’s a weird coincidence. And now, as a direct beneficiary of him being an astronaut, I’m advising other undergraduates in the McNair program. It’s a pretty cool connection.”